I finally have a sec to whip up a blog post! My life has been so SO busy balancing work and mommyhood! Let me share with you some of the ideas for activities that we have done over the past couple weeks.

My Faith Mondays:
We have learned about the Old Testament prophets Noah, the Tower of Babel, the temple, and the Book of Mormon story of Samuel the Lamanite. We are currently working on the story of Joseph Smith and the origin of the Book of Mormon. I decided to spice things up by alternating weeks between bible and book of Mormon stories.
For Noah I used a file folder game found here and a lapbook found here. 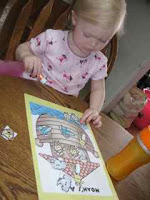 My favorite part of our whole Noah lesson was hearing my daughter read (actually she memorized it) the memory verse: “Noah did everything God commanded him to do.” 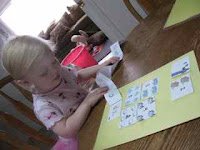 To learn about the tower of Babel, my Boo and I built a tower up to a picture of Jesus. We then used Little People (valuable resource for learning!) to try and climb the tower to see Jesus. I then had Jesus tell the people that they don’t climb a tower to see him (in my daughter’s words “that is SOOO silly”) but we pray to him instead. I kept the lesson super basic and my little one caught on! 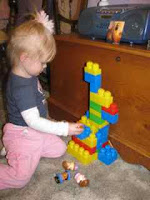 We learned about the temple this past week as well. We built a tower with blocks and used the Little People guy my daughter has named Tony as Angel Moroni on top of one of the spires. We talked about how we all got to go to the temple as a family and I showed my daughter her temple dress, after which she wanted to immediately take of her jammies and put it on (and for her thats a big thing- jammies are her favorite things to wear)! She has grown in the past 2 years however- but she still squeezed into her bonnet! We also had some of the Little People go to visit the temple- I had one of the people be naughty and told Boo that ‘cuz that person was naughty, she couldn’t go to the temple. She had to make better choices and be nice. NO time was wasted in repenting so all the people could be at the temple!
—
Samuel the Lamanite was another little story we talked about this week- using the megablocks and Little People again- we built a wall and had Tony a.k.a. Samuel tell the people (who happened to be Candy Mommy and Santa Claus Little People) that Jesus was coming and they needed to be nice. Kept it short and simple and to my daughter’s asking repeated it A LOT!!! She really likes her scripture stories!

Tumbling Tuesdays:
We picked up some hula hoops for Boo and she LOVES them! She calls them her “hula loops” – so cute! What do we do with them? We jump from hoop to hoop, we use the hoops as cars and run around the house, and eventually mommy will be using them for sorting activities. We also have gone on a few walks, been to the park to play, and learned new games such as Red Rover and Tag. Which my daughter CAN NOT get enough of!

Wednesday’s Words:
So this has been very low key- we have learned spanish words for eyes, ears, nose, mouth, arms, head, body, cold, and hot. I want to have her make a book of the spanish terms she is learning so we have an easy way to review words. That is still a project in the making, however!

Tea Time and Rhyme Thursday:
We have spent the last two weeks learning the story of the three little pigs. Initially I wanted to do a different nursery rhyme a week, but right now I am WAY too busy to gather materials for that. 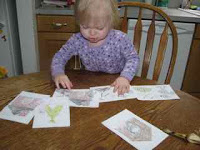 Field Trip Friday–
We went to the train station on a cold morning and had all the display trains to ourselves to explore! 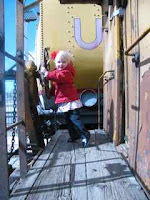 and a few days later RODE on a train to a nearby city, in a blizzard, to go to build-a-bear. On our way to build-a-bear we stopped by a planetarium to dry off from the storm and “walked on the moon”. 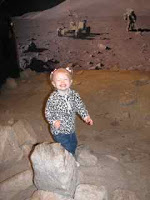 It was a lot of fun! I have a list somewhere on my computer of possible field trip locations for your kiddos- if I can find it I will upload it!

Some things I want to ADD to our fun days: piano lesson (I have the workings of a very basic “piano” curriculum running through my head) math exploration time, and more arts and crafts. I am slowly getting a structure and routine in place- I just need about 5 more hours in a day to get everything accomplished! And one day a week where I can do some uninterrupted lesson planning!
If anyone has great spanish teaching ideas (besides watching Dora the Explorer) I would love to hear them!!!!
Happy Teaching!!!