I am SO excited that so many of you have been downloading and teaching our Anger Management with Angry Bird pages. I am impressed that you took the time to download each individual page from our WIKI… but I thought I should update it to make it easier! So for those who haven’t downloaded the Angry Bird pages- you can easily download the PDF now! 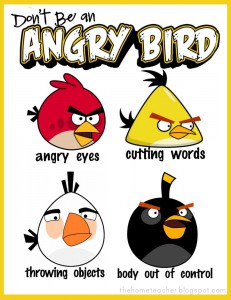 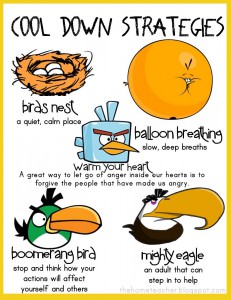 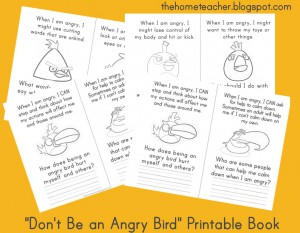 I have finished the newest “Don’t Be An Angry Bird: Lessons on Anger Management for Kids” printables. There are some new pages to be added to the original printable book. These are not intended to just be worksheets, but as a tool to discuss anger with your children. There are also new posters in black and white and color that I am adding to our wiki. 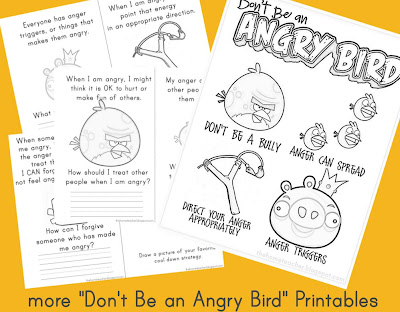 To download these free files, click HERE. You will be redirected to our site’s wiki where you can download any and all anger management for kids files!

I am in AWE with how quickly this idea is spreading. Thanks so much for your sweet comments- I read every one and am so excited that so many of you are able to help your kiddos understand and deal with their anger. 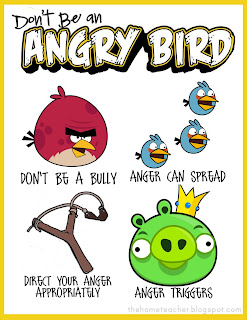 Ever since I posted my first angry bird/anger management post, I have felt an overwhelming positive response from parents and teachers who needed something to help their kids understand and deal with their anger. I felt SO thankful to know that I am not the only parent out there struggling with this! And I really do appreciate all your comments and emails- they just make my day!

Our anger management system is great- but it felt incomplete. So I would like to introduce you to the slingshot, pigs, blue birds, big red bird, and ice bird (newest bird from Angry Bird Space)… anger management style. I just have to add- these strategies were created to help my daughter understand and deal with her anger- so maybe not all these will apply to your children. 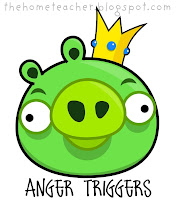 Pigs: They stole the eggs and made the birds angry. What triggers your kiddo’s anger? Is it someone else taking their toys? Being asked to clean their room? Or is it frustration when they can’t complete a task? Maybe its a brother who antagonizes or teases. My daughter’s biggest anger trigger right now is centered around impatience: not getting what she wants when she wants it.
Once our kids are familiar with their anger triggers, you can work with them on creating plans to avoid becoming an angry bird and choosing ahead of time the cool-down strategies they will use. This would make for a FABULOUS role playing experience for family night so everyone can be familiar with each other’s cool-down plans. 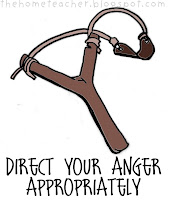 Slingshot: How will you direct that energy that builds when you’re angry? After your child feels the anger building up inside her, she ultimately is the one who decides her actions. She can catapult herself at her antagonists (aka pigs) or she can redirect that energy into something else: going outside and jumping on the tramp, doing jumping jacks, leaving the classroom and walking to the drinking fountain… for me I catapult my energy into loudly play the piano. Once that energy is released it is much easier to take those big balloon bird breaths. Teaching your child to point their slingshot at something less destructive and harmful will help your child socially cope with their anger. 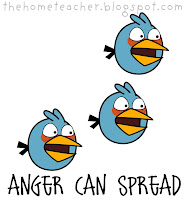 Blue Birds: I had made plans for the blue birds to be something different until I read a comment with a MUCH BETTER idea. Props go to Chanda for coming up with this!! (I just love it when we can help each other be better teachers and parents!!) And if you are Chanda- please email me so I can thank you directly for this idea- I don’t know how to get a hold of you!
The blue birds teach us that our anger can spread to others in the home or classroom. I can TOTALLY relate to that- when I am grumpy I bring the rest of the family down. And the same goes with our kids- their outward inappropriate expressions of anger can spread and dampen the moods of others. A child gets angry that her younger brother is playing with her toy. She snatches the toy out of his hands, making him mad and hitting his sister. Mother walks in, frustrated with the situation and uses cutting words to her children. Her frustration makes the children feel hurt and more angry.
You can see how that one initial act of anger spread to her brother and mother!
And not only are they dampening the mood of the home, but they are setting an inappropriate example to younger siblings of how to deal with anger. 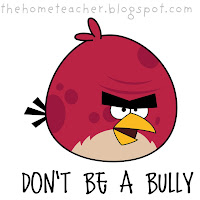 Big Red Bird: This bird is big, tough, and picks on pigs smaller than him. Don’t be a bully bird. Sometimes a child caught up in anger or looking for attention or lacking self esteem (or whatever makes a person a bully) may think it is OK to take out her frustration on others. It is VERY important to teach our kids that this behavior IS NOT ACCEPTABLE. If your child is being a bully bird, try using these strategies to help her: acknowledge the problem, be a  hands-on parent, decrease violence at home, teach positive behaviors, and seek professional help if needed. These particular strategies are from education.com– check out this informative site for a more detailed explanation.

And last, but not least, I would like to introduce you to the Ice Bird- the newest angry bird that you’ll see on Angry Bird Space available March 22. Apparently he will turn things into ice. 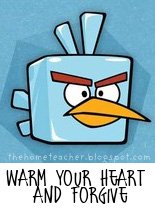 Ice Bird: Don’t be an ice bird! Maybe your child’s words aren’t cutting- but her tone of voice and actions are as cold as ice. This is what I consider silent anger- you might not see the tantrums or outward angry expressions, but the big emotion still exists. Whether it stems from feelings of inadequacy (not being the best reader or soccer player) or simply holding a grudge- anger can exist and chill a person’s heart- stopping them from forgiving others including themselves.  And forgiveness is a great way to free yourself from anger, keep a friend, and just be happier.

Feelings of anger don’t have to be frozen inside. A child should feel comfortable talking with others about how she feels- whether those feelings be good or bad. A child who suppresses her anger because she is not allowed to express it at all can lead to feelings of low self worth and depression. Teach your kids that feeling angry is “normal”. And when she messes up and throws a huge tantrum in the middle of the grocery store- don’t be cold to her. Forgive her.

Love can melt away anger faster than anything else.

I have been working on some printables to go with our angry bird/ anger management lesson (read more about it here) and thought I would share them with you all! I am SO thankful for all those that have left comments, sent me emails, and pinned this idea. It means so much to me. I just love it when I can share something that inspires and helps others. In a silly way I feel like a teacher again, with the world as my classroom…. cheesy, I know. But that’s just who I am! 😉
Clicking on the printable book picture will take you to our site’s wiki, where you can download each of the four pages. This is not designed to be a worksheet for a child to fill out on their own. Read the book with your child, and discuss the questions on each of the page. The goal of this book is to help your child UNDERSTAND their anger and learn some appropriate strategies to DEAL with it.

To download the posters, just click on the picture. For a black and white version, or the download isn’t working, check out our Angry Bird page on our site’s wiki. And make sure you read our original Angry Bird post to learn more about each of the angry birds and their role in helping kids understand and deal with their anger. 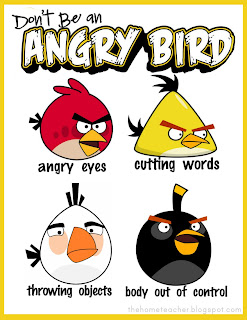 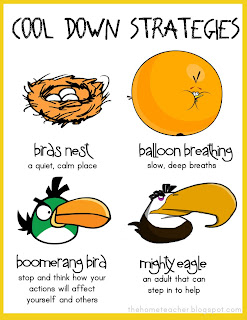 I hope these help you deal with your little angry birds at home! Don’t forget to comment and let me know how this is working out for you!
Happy Teaching!

Like many of you, I want my daughter to be gracious and kind. Especially when given a gift. To avoid any potential acts of ingratitude during her birthday party, we practiced opening presents. It was a totally fun game and it provided my kiddo with the learning experience I desired! This would be a fun activity to do with your kids right before a birthday, Christmas, or other times of gift exchanging! 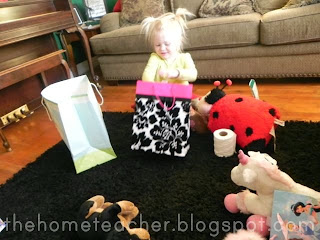 My daughter had a surprise party with some of her stuffed animals in attendance. Each animal brought a gift (misc toys found in her playroom). 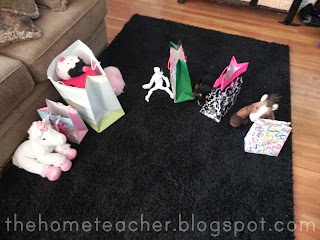 Some gifts were good- like her favorite dinosaurs or pillow pet.

Others were not so good- rolls of toilet paper and random food storage items from our pantry.

We sat in a circle and one at a time each animal would give their gift. Boo would open the present, say one thing she liked about the gift, and “thank you”. Even when the gift was not so good. 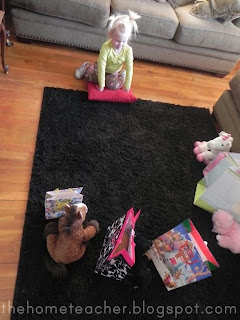 The day of the birthday party came- and my daughter got lost in the excitement of all the presents- but I think she was as gracious as a 4 year old could be with a stack of so many fun toys to play with! This is one reason I LOVE opening gifts throughout the entire day instead of one fast paced session. 🙂 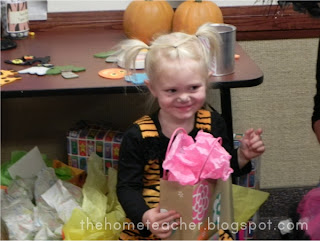 I wanted to make a behavior jar for my daughter where we could reward her for obeying family rules (and take jelly beans away if needed). You can imagine my delight when I came across the Bean Jar Kids app for the iPod and iPad. Bean Jar Kids lets you create up to 4 different jars and lets you decide on the number of beans needed to fill the jar. Once the jar is full, then we decide on the reward. The first jar we created only needed 6 beans to fill up, and we had a family ice cream party. This time around we need 10 beans before we get a picnic at the park (and just our luck we have one bean to go and snow everywhere!). I love the portability of our new jar! Definitely worth the $1.99!