It’s time for another post on the human body! Today we talked about the circulatory system…. more specifically the heart, arteries, veins, and lungs. Before we set out for our activities I had two goals: First, I wanted my daughter to know that the red arteries deliver oxygen, while the blue veins carry out the “garbage” (the term carbon dioxide was not part of today’s lesson!!) The second goal was to add the circulatory system to our human body. 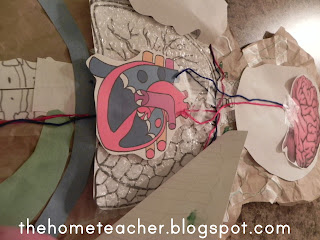 Two ways to teach your child about the circulatory system:
I drew an enormous chalk figure of the human body in our unfinished basement, and made sure to include the trachea, lungs, heart, arteries, and veins. I also pulled out my red and blue unifix cubes for the blood. I also grabbed some cans of silly string we had sitting around.
Example #1: We tossed all the red cubes in a ginormous dump truck from my daughter’s sandbox. I told Boo that the blood goes to the lungs to get air, then we blew on the red blocks. We delivered red oxygenated blood by “driving” the truck down the arteries and tossing red blocks throughout the body.

The dump truck then turned around, and drove up the veins while Boo picked up the blue blocks- AKA garbage (for older kids I would use the term carbon dioxide!).

When the truck got back to the lungs, it dumped out the garbage, then we ran it up the trachea and breathed it out! I know a lot of the technical stuff may not be remembered, but we had fun…and at the end of the day, thats what counts.

After our kinesthetic illustrations of the circulatory system, we went upstairs and added the components to our human body chart. The heart was printed out from this site, and the veins and arteries were pieces of old embroidery floss (yarn would work just as well). 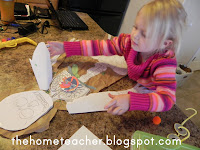 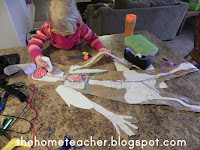 We had plans to make a stethoscope and listen to our heart beats, but that didn’t happen…. we were able to  feel our heart beats with our hands before and after running around. This is a great time to discuss why our heart beats increase when we exercise and the importance of oxygen to our muscles. 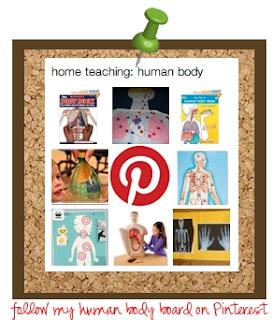