My daughter’s birthday is on Halloween- it’s so fun! We try and have a Halloweenish birthday party for her every year. We had an “ABC’s of Halloween” party when my daughter was into her alphabet, and a “Bibbety Bobbety Boo” princess Halloween party when she loved Cinderella. This year we went with a safari theme since my Boo is totally into animals! She loves the weird animals no one has ever heard of- like the ibex and the okapi. Boo even wanted to be one of them for Halloween- but poor Mom had no idea how to make either – and luckily for me she ended up choosing a tiger costume. Phew!


The Invitation
Simple and fun! I got the clipart from Shannon’s Digital Scrapbooking. 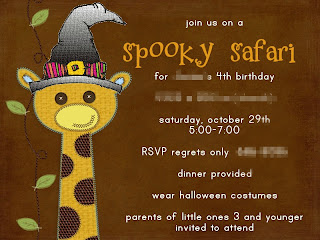 The Guest List
When asked who to invite to her party- my daughter told me “everyone”.  We opted to just invite some close friends, family, and friends from her church class and preschool.


The Food
You can’t just have pizza and salad on animal safari! We braved it up and ate predator pizza, safari salad, and skeleton bone breadsticks. Drinks were found at the water hole, and although I forgot to tell people the official name during the party- we had ibex ice cream sundaes.
Treat jars included tiger eyes (eye ball candy from the Dollar Tree) and okapi brains (gunny worms).

The Decorations
Green and black streamers gave us the scary jungle feel. We listened to Halloween music- including Halloween background music that actually sounds like a haunted forest so it was PERFECT for our spooky safari! I hung skeletons and Halloween decorations from the dollar store. The kids table had little Halloween pails with animal crackers. There were signs for all the food- as well as a welcome sign and animal footprints leading guests to the party room(since the party was held at our church). 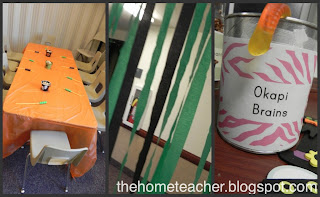 The Games
Every year we read a story at the party. Two of the years I actually made books! This year I was lucky enough to find the book Jungle Halloween. It was a perfect book for the young audience (3-5) and it went so nicely with our theme! 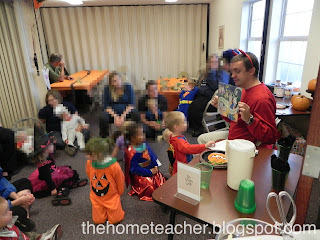 After the story, we went to the gym and played hippos in mud (similar to musical chairs but kids walk around in a circle and try to get stuck on brown pieces of construction paper-aka mud). 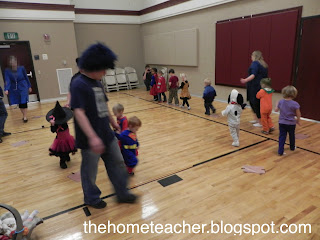 We also had a jungle frog jumping contest with frogs bought at the dollar store. This was a riot! The frogs were also part of the party favors for the kids to take home.

We played a short game of animal charades. I had pictures of different jungle animals folded up in a basket, and guests would pick an animal and act it out  while everyone else tried to guess.

We took a short cake/ice cream/open presents break, then it was time for our final game! The kids went on an animal safari to three different parts of our spooky jungle- the snake pit, the haunted forest, and  bugs & bones land. Each room had plastic creatures (animals/snakes/bugs/skeletons….based on the theme) that the kids could hunt for. I had purchased what I THOUGHT was a bag of little spotting scopes for the kids to take with them on their hunt- but they ended up being little noisemaker whistles (why do some party stores not label their favors!) So if I were to do anything different- i would have made sure that the kids take a scope or toy binoculars to take with them! The kids had a blast with the safari and it was a great culminating activity before the kids went home.