I decided to do a fun Halloween countdown with my daughter (read more about it HERE). While we aren’t starting quite yet, I wanted to compile all my ideas by October 18th so I am ready to go. Each day has it’s own Halloween theme. Enjoy! 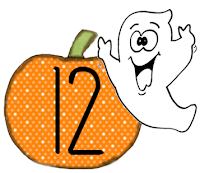 Our second theme for our 13 day countdown is ghosts. Here are some of the fun ideas I have found (sorted by category). And while I will only have time to do two or three of these ideas, I wanted to include everything I found that was noteworthy. Many of these were found on Pinterest (i just LOVE this site!) some are on my wiki, and some I have found through google searches.
Service Project (Same concept as 12 days of Christmas…but with a Halloween twist!)
Literature
10 Timid Ghosts While we haven’t read this book YET, it has gotten great reviews and I look forward to reading it! Katie’s Nesting Spot shared this great art project that goes along with this text:

Our wiki has some ghost learning pages, including a ghost synonym page.

Making Learning Fun has some cute ghost printables… a ghost scissor practice page and ghost blower activity using paper ghosts and coffee stir sticks (can be used as a game, but educational ideas for this activity are also included).

Treats & Eats
I LOVE this ghosty pizza- the recipe from My Recipes. Yummy! 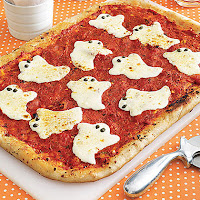 This is something that I have to make from Gourmet Mom on the Go… ghost pancakes! Love ’em! 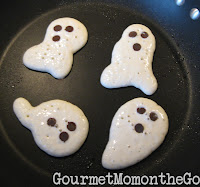 Cute little Halloween Peeps in a jar or baggie- directions found over at Southern Vogue. Spooky and sweet! I am in love with this fabulous hanging ghost from Everyday is a Crafting Day. It doesn’t seem too hard to make, and the kiddos might enjoy helping out…especially after seeing the outcome!

Paper plate ghost from Kaboose. Easy enough for all ages!

Play at Home Mommy (love this site!) showed a simple way to make Halloween candles with the kiddos. Great step by step pics.

The Crafting Chicks posted a tutorial on making handprint ghosts with your kids.

Games
Prepared Not Scared has some free printables for a Ghost Hunt game and Ghost Story Dice…super cute! This is one amazing site!! 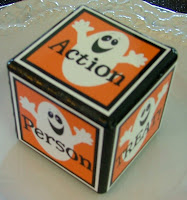 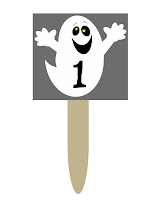 Just Preschool Themes has instructions for three Halloween games: Bobbing for Ghosts, Find that Ghost, and Bowling for Ghosts.
Ghost in the Graveyard game instructions (can be adapted for younger kids)
Fingerplays and Songs
These were all found at Kid’n’Kaboodle– and they have a whole lot more!

One Little Ghost
One little ghost flew down the street.
(Wave hand through the air.)
“I wonder,” he said, “what I will meet–
(Place finger to temple, thinking.)
One hairy spider,
(Hold up one finger, then move hand like spider.)
Two black cats,
(Hold up two fingers, then put two fingers from each hand on head for cat ears.)
Three wild witches with pointy hats,
(Hold up three fingers, then place fingertips of hands together to form hat.)
Four old owls in a hollow tree,
(Hold up four fingers, then form an oval with both hands for eyes to look through.)
And five brother bats to fly with me!
(Hold up five fingers, then hook thumbs of both hands together and flap fingers for bat wings.)

A fabulous idea from Thrifty Decor Chick… this mirror looks amazing. I am going to have to spend more time on this site… it looks like there are lots of fun projects!